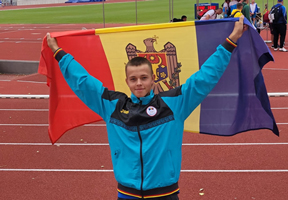 Day two of the European Youth Olympic Festival (EYOF) Banská Bystrica 2022 saw Denis Cutcovetchi announce himself on the continental stage, when he captured the bronze medal in boys 5kg shot put event to record Moldova’s first medal in Slovakia.
Cutcovetchi, from Carmenca, set a new personal best with a sensational throw of 15.93m to storm into third place on the leader board and overtake Polish athlete Kacper Kuczaj. It was clear for all to see what it meant to the young starlet, who jumped for joy immediately after the result of the throw was read out!
Cutcovetchi followed the family tradition, started by his father Vladislav, of competing in shot put at a young age. Vladislav competed at the previously named European Youth Olympic Days event in 1995, which took place in Bath, England. His father will be proud to see the Cutcovetchi name come away from an EYOF event with a medal!